In modern day L.A., Lark is a savvy, white-collar criminal trying to assemble a new crew to assist in his perfect plan-to-end-all-plans. Peabody is a tired middle-aged cop who cares more about his family than his dead-end job. And Anthony is a newly hired dogcatcher whoâ€™s just fallen in love. These three men couldnâ€™t be more different. But their lives become intertwined when Peabody is called on to investigate the disappearance and deaths of several of Anthonyâ€™s kennel colleagues. Suddenly, L.A.â€™s dogcatchers are dropping like flies. But Anthonyâ€™s too ga-ga over his new flame to wonder if heâ€™s next. If he only knew his girlâ€™s true nature, he wouldnâ€™t just be worried, heâ€™d be outta there faster than you could say, â€œhere, boy!â€ Because she wears fur under her silky smooth skin, and answers to Lark, who, besides being a criminal mastermind, also happens to be a werewolf bent on world domination. Anthonyâ€™s girl is just one of his many disciples. Anthony and Peabody donâ€™t know it yet, but theyâ€™re about to come into uncomfortably close contact with some very sharp teeth! You follow me so far? Good, because thatâ€™s only the first twenty pages or so. What comes next is an intricately plotted dog-eat-dog tale of blood, money and fangs that defies definition. First time adult novelist Toby Barlow has written a romantic supernatural noir mystery (in blank verse, no less!) that will keep you guessing right up until the final dogfight. If you are addicted to Stephen King or devoted to Dean Koontz, then Sharp Teeth is right up your dark alley. A four-star thrillerâ€”go fetch ST from your nearest library or bookstore asap! This one canâ€™t wait to be read in paperback, itâ€™s that cool AND that hot!

London Goth-girl Lottieâ€™s been caught flashing her fake i.d. a bit too often, so Mum and Dad are sending her on an all-expenses paid vacation to her grandparentsâ€™ posh but terminally boring golf club in the countryside in order to get her away from the temptation of the club scene. Lottie doesnâ€™t do bucolic very wellâ€”she canâ€™t tell a putter from an iron, and her three-inch heels keep snapping off in the grass and cow pats. Evenings with the grandâ€™rents are tedious, but things pick up once she and cute golf pro Howard discover a dead body with a strange mark carved into its flesh in a pond beyond the 9th hole. Could the rural Goth-kids she ran into in the quiet village actually be ritual murderers? Or could the perpetrator of this foul crime be someone much more ordinaryâ€”and frighteningly closerâ€”to Lottie? This feisty, Brit-flavored graphic mystery, full of red herrings and lipstick, pokes gentle fun at Goth-culture while keeping readers turning pages to find out whodunit. A throughly entertaining read that will help pass the time behind the velvet ropes while you’re waiting for the bouncer to let you in.

I was initially a little worried when I discovered there was going to be a graphic novel version of the Neil Gaiman insta-horror-classic, Coraline. Even though I neglected to post a review here of the original novel when it first came out (see original cover at the bottom),Â  I absolutely loved it and still promote it like crazy to my students. Would creating a GN version enhance or destroy the black magic of the initial work? For those of you not in the know, the title character is an only child who lives on a rambling old country estate with her busy working parents. She is bored with her solitary life, wishes her parents would pay more attention to her, and longs for adventure. Then Coraline discovers a door in the old house that leads into another world that is a mirror-version of her own. The two parents in this world dote on her and hang on her every word, and the toys in her room in this world are far more interesting than the boring old toys in her real room. Except, sometimes theyâ€¦move when Coraline isnâ€™t looking, and instead of a dog or a cat to play with, there are big, black rats. Her attentive new parents are greatâ€”except they have black buttons instead of eyes, and keep wanting to sew buttons onto Coralineâ€™s face, too. When Coraline decides sheâ€™d rather live her own world, the â€œother motherâ€ gets angry and kidnaps her real mother and father. Now Coraline must return to the other side of the door and play a dangerous game with the other mother in order to

save herself and her parents. My fears that the GN wouldnâ€™t do justice to Gaimanâ€™s work were groundlessâ€”P. Craig Russellâ€™s illustrations were just right, and matched the creepy visions I had in my head after reading the original. Seeing the â€œother motherâ€ on the page in all her black-buttoned glory was a sinister treat, and the scene when the â€œother fatherâ€ shambles up the cellar stairs in pursuit of Coraline after she has ripped the buttons from his melting face is completely terrifying! I strongly recommend checking this one out if you loved the novel, or are just a fan of horror comics. 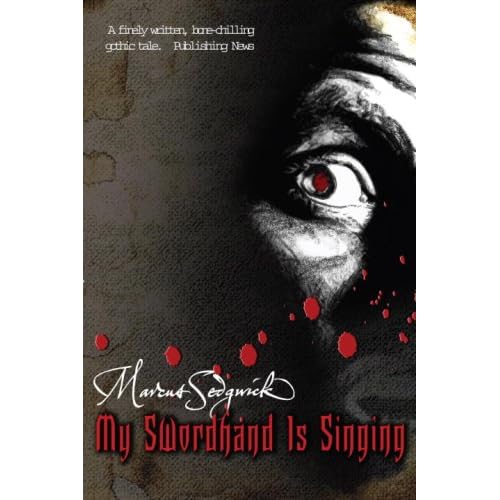 Somewhere in the deep woods of seventeenth-century Eastern Europe, Peter and his father Tomas, woodcutters by trade, settle down on the outskirts of a tiny village called Chust. Peter is grateful to finally have a place to call home, as most of his short life he has traveled from town to town with his alcoholic and silent father, who never seems to want to stay in one place for too long and refuses to give an explanation why. But as fall turns into winter, Chust is gripped with terror as bodies begin to litter the snowy landscape, bodies of friends and neighbors that have been horribly mutilated. Soon the suspicious villagers are whispering that maybe the murderers are the woodcutter and his son. After all, they are new to the village, and the killings didnâ€™t start until after they arrived. Peter is frightened, but his father is strangely unmoved, calling the villagers superstitious fools. Does Tomas know more than heâ€™s telling about the brutal murders? What followed Peter and his father to the remote village? And can it be stopped from fulfilling its bloody destiny? Peter believes the answers lies in the large, weather-beaten box that Tomas refuses to allow him to open–a box long enough to hold a sword…Brit author Marcus Sedgwick manages to write an entire terrifying historical novel about the mythological European origins of the blood sucking undead without once using the â€œVâ€ word. His fascinating story is full of interesting tidbits of forgotten folklore, like the Nunta Mortului, or The Wedding of the Dead. If a young unmarried man dies in his prime, his corpse is “married” to the oldest village girl, who must live in isolation for forty days as she “mourns” him and is considered a widow forever after. A deliciously horrible ritual that I can only guess Sedgwick uncovered in his research of the oldest vampire legends of eastern Europe. But even if folklore isn’t your thing, how can you resist one of the best opening lines ever? “When he fell for the fifth time, when his face plunged into the deep snow, when his hands burnt from the cold but he didn’t care…the woodcutter knew he was going to die.” Can you say, “BRRRRRRRR!” times a thousand? This book screams to read, in more ways than one!

Fifteen-year-old Scarlett Martin lives in and helps operate a seen-better-days boutique hotel in Manhattan with her parents and three siblings: aspiring actor/big brother Spencer, sacrificial older sister Lola, and bratty little sister Marlene. Ever since Marlene had to be hospitalized for cancer a few years ago, the familyâ€™s finances have been depleted to the point where the Martins are barely keeping their feather dusters above water in the competitive New York City hotel business. Now each Martin has to pitch in to keep the drowning Hopewell hotel afloat, and while Scarlettt doesnâ€™t mind doing her share, she wishes her upcoming summer could be about more than changing sheets and airing curtains. Enter Mrs. Amberson, a rich, aging diva with loads of attitude and connections. She books a room in the Hopewell for the summer with the intention of writing her autobiography and reliving the halcyon days of her storied youth, and quickly hires Scarlett as both audience and assistant. Having Mrs. A around will certainly liven up Scarlettâ€™s weak-ass summer. But when the past-her-prime starlet starts dishing out unwanted advice about Scarlettâ€™s barely-there love life, while simultaneously taking and making over Spencerâ€™s struggling Shakespeare company, Scarlett realizes that Mrs. A may be way more than what the doctor ordered for her summertime blues. This madcap romantic comedy is my new favorite Maureen Johnson title. Like the classic movies Breakfast at Tiffanyâ€™s, or Philadelphia Story, it is full of witty repartee and blithe banter, especially between Scarlett and her beloved brother Spencer. (Methinks it was inspired in part by some of the playful word jousting that goes on in real life between Maureen and her good friend, fellow YA author John Green. Want to see some of it? Click here.) In addition, Johnson includes several sections from “guidebooks” about the imaginary Hopewell that lets readers know a bit about it’s glorious past, which read like love odes to some of the great NYC historical hotels (like the real Algonquin, which has quite a literary legacy) Whether you’re looking for a romantic romp, brilliant back-and-forth dialogue, or just a great New York story, Suite Scarlett is the book for you! (and how interesting that the cover model looks remarkably like another Scarlett : planned? or coincidence?) Reservations can be made at any library or bookstore near you.