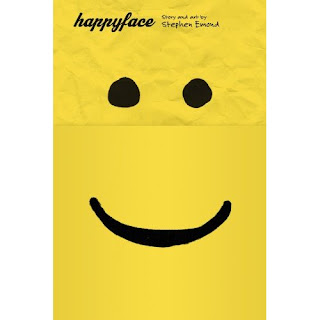 Heâ€™s just a regular dude. Sure, his parents fight sometimes, and his older brother is a pain in the ass. And yes, occasionally heâ€™s lonely and his best friend and secret crush Chloe seems to have no idea how he really feels about her. But for the most part, his life is just fine. After all, heâ€™s â€œgot my art and my journal to write in, and Iâ€™ve got Olâ€™ Trusty, the Internet to keep me company. If the apocalypse strikes tomorrow, thatâ€™s still a pretty good survival kit.â€ Then life comes to a screeching halt (for reasons our narrator slowly reveals that I wonâ€™t be spoiler-y and tell here) and our dude finds himself starting over at a new school, with a new crush and a new crowd to navigate. What happened to Chloe? Whatâ€™s up with his parents? And where has his big bro gone? Our hero isnâ€™t tellingâ€”yet. All we know is that heâ€™s in so much pain heâ€™s turned himself into Happyfaceâ€”an alter-ego that always smiles and has sworn to never be hurt again. But how long can Happyface hold that grin before his past comes crashing down on him?

Some of you will find Happyface a little TOO typical. Heâ€™s not fighting vampires or turning into a werewolf, heâ€™s not wasting away from a terminal disease or being secretly abused by his parents. Heâ€™s just living and recording the story of his (somewhat) normal life in words, drawings and comic strips the year after something terrible happens. Something terrible enough to make him want to start his life over as someone else. Someone whoâ€™s happy. Someone whoâ€™s popular. Someone who knows all the answers. For some of you, this story will be too close to your own experiences, and youâ€™d rather go to a different head space when you read. But for those of you who read to know youâ€™re not alone, or who always hang around the art room after school and put all your most secret thoughts in your sketchpads, this personal and incredibly honest story is YOURS.

10 thoughts on “Happyface by Stephen Emond”