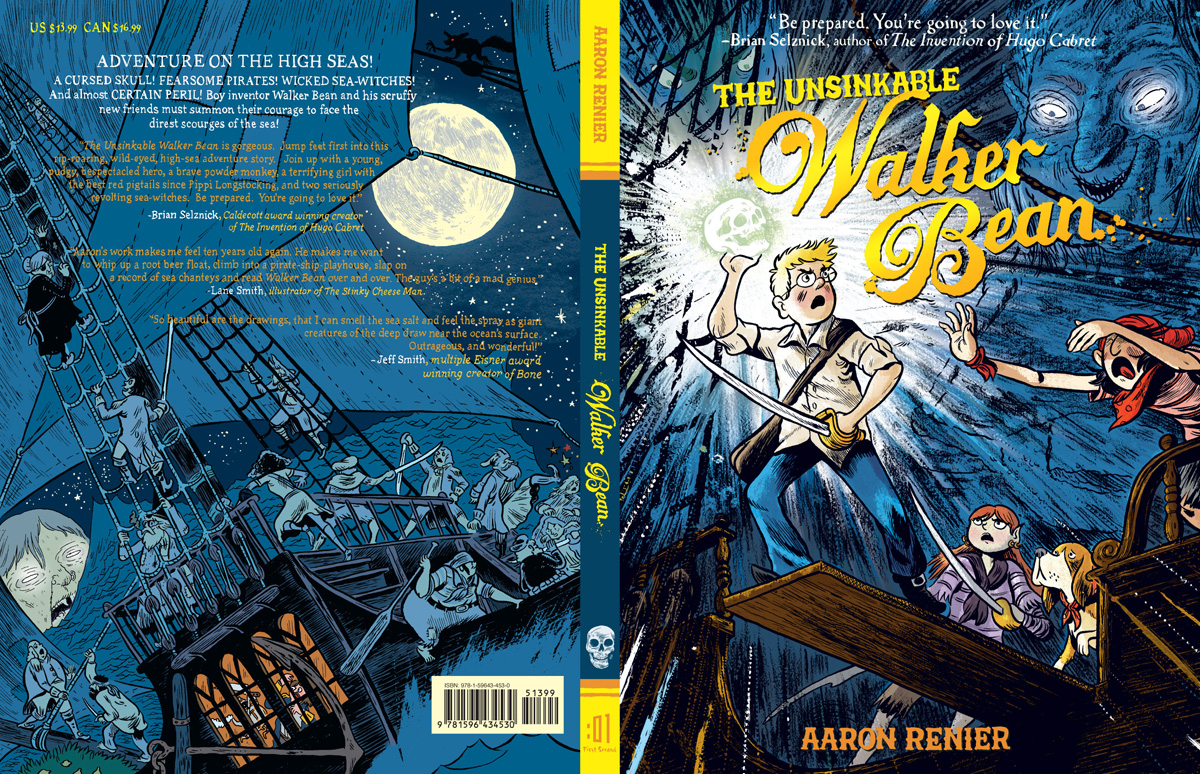 fame has drawn and penned a gorgeous full-color GN that chronicles the tall tale of one Walker Bean, who is darned lucky to be unsinkable because he has an enormous talent for getting into trouble. It all starts when Walker’s beloved grandpa falls deathly ill. Turns out he set eyes on an enchanted skull that came from the deep underwater trench between the mysterious Mango Islands. The trench is home to the dreaded merwich sisters Tartessa and Remora, and the skull was part of their endless collection of bones of the dead who had the misfortune of meeting up with them. Anyone who dares look at the skull either sees the future, becomes fatally ill or both. Walker’s grandpa knows the only way to save himself and his seaside town is to get the bonehead back to its cave sweet cave. Because when he looked into the empty eye sockets, he also saw into his future. And what he saw was the two hideous sisters climbing out of their watery hole and coming to claim their property, destroying everything in their path. Walker’s dad, a navy officer, thinks it’s all bunk and wants to sell the valuable bone to the highest bidder. So Grandpa begs Walker to hide the skull and find a way to return it to its gruesome owners. Walker sets off, but is soon sidelined by everything from a boatload of pirates to a sassy sword wielding deckhand named Genoa who may be a girl but who can still kick his butt six ways to Sunday. It’s going to take all of Walker’s considerable powers of imagination to figure out a way to outsmart his father, save his grandpa and keep the merwitches down with the Titanic where they belong. Can he do it? Of course, because we already know from the title that Mr. Walker Bean is UNSINKABLE! Bespectacled Walker is a lovable nerd hero of the first order, with his journals full of invention ideas and his, well, less than “Situation” physique. This fast-paced, hyper-detailed action adventure is fun for the whole family. I mean it, I can seriously see both your bratty little sibs and your tyrannical parents trying to arm wrestle you for it, it’s just that entertaining. I couldn’t stop pouring over the intricately detailed panels, especially the double-paged spreads, which are eye-popping in color and scope and reminded me in the best possible way of one my most favorite childhood reads.Â  Soon to be sailing into a library or bookstore near you!

What if your adolescent baby fat turned out to be a permanent situation? Thatâ€™s our dude Dougâ€™s issue. Heâ€™s fifteen and pudgy, and now that heâ€™s been turned into a vampire, heâ€™s destined to be fifteen and pudgy forever. Heâ€™s also dealing with his clueless best friend Jayâ€™s complete lack of social skillz and an impossible crush on a gorgeous Indian exchange student named Sejal. And then thereâ€™s that nagging itch in his gums that says his fangs are out and itâ€™s time to feed. The problem is, because of his lack of Edward-Cullen sparkle, Dougâ€™s having a hard time getting close enough to a girl to kiss her, let alone take a sip from her jugular. So heâ€™s reduced to sinking his fangs into the local dairy cows, but thatâ€™s like hitting Mickey Dâ€™s when you really want filet mignon. Dougâ€™s gonna have to figure out how get some high octane Type O pronto, or his vampire a** is grass. Adam Rexâ€™s first teen novel reminds me a lot of funnyman Christopher Mooreâ€™s paranormal comedies. I laughed my way through Doug & Jayâ€™s serious awe at attending their first Comic Con (“…this goblin market at the nexus of all realities where a circa 1980s Iron Man and an original 1963 Iron Man and Naruto and Sherlock Holmes could all be waiting for the same bathroom. Would it convey the scale of the thing to know that there was a person who elected to dress as the Kool-Aid Man? Would it convey it better to know there were two?”) and their run-in with some hecklers at a Rocky Horror Picture Show midnight showing. At first I thought I was reading a nerderiffic anti-Twilight. But Rex shifts gears about half way through as Doug starts to come into his own as a vamp. The jokes get a little darker around the edges as Doug tries to hold on to his goofy humanity as his heart relentlessly grows colder and colder. This two-for-the-price-of-one comedy angst-fest comes with an out-of-the-box ending thatâ€™ll either leave you shaking your head or cheering on Rexâ€™s refusal to be nailed down when it comes to deciding Doug’s fate. Either way, Iâ€™d love to know what you think–please come back and post! (And can we give it up for what just might be the best cover art of the year?!)

Unicorns and zombies battle for supremacy in this ultra cool collection of short stories edited by YA rock stars Black and Larbalestier.Â  The rival authors engage in a fervent back-and-forth argument before every story, each claiming that her supernatural creature is the more badass of the two. But the spectacular stories the two editors have assembled make it very hard to choose between Team Zombie and Team Unicorn. Among my favorites were Garth Nixâ€™s inspired opener â€œThe Highest Justice,â€ a medieval tale that includes both a zombie AND a unicorn, Alaya Dawn Johnsonâ€™s surprisingly touching zombie romance â€œLove Will Tear Us Apart,â€ and Margo Lanaganâ€™s tragic story of an unholy union between unicorn and maiden in â€œA Thousand Flowers.â€ Maureen Johnson brings the funny with â€œThe Children of the Revolution,â€ a story of celebrity zombies that almost made me pee my pants laughing, and Meg Cabot also keeps it light with â€œPrincess Prettypants,â€ about a rainbow-colored, flower-scented farting unicorn who can also kick butt when necessary. More serious are Carrie Ryanâ€™s, Scott Westerfeldâ€™s and Libba Brayâ€™s darker visions of a future America where frightened and cynical teens must abandon the adult rules of the world before the zombie apocalypse and create their own new societies from scratch. Thereâ€™s even more, but I leave the rest for you to discover when this unique collection comes galloping/shambling into your local library or bookstore. Â And what team am I on? Well, it was hard to decide since many of my fav author peeps swing the other way, but since I am ultimately an optimist and romantic at heart, I could always only be firmly in this camp: