Letâ€™s be very clear–almost eighteen-year-old Stella Madison is NOT a foodie. She prefers Cheez Whiz to aged cheddar and her pastry fried, not puffed, thank you very much. But itâ€™s hard to maintain her junk food standards when she is the offspring of two hardcore gourmands. Her mother is a restaurant owner and her father is a famous French chef, but despite all their best efforts, Stellaâ€™s palate stubbornly remains stuck on chicken fingers. â€œI donâ€™t know why my parents canâ€™t accept the fact that Iâ€™m not and never will be a foodie. It doesnâ€™t make me any less their daughter just because I prefer chicken nuggets to squab (which is really just a fancy name for pigeon, by the way).â€ All that changes when Stella is offered a restaurant review column at the local paper. It pays too well to turn down, but Stella doesnâ€™t know a fig from a fish stick. Good thing her momâ€™s hunky new cooking intern Jeremy has offered to help her figure it all out. Thereâ€™s just one little problem, and his name is Max. Heâ€™s Stellaâ€™s boyfriend, which Stella keeps forgetting every time she gets an eyeful of Jeremy. Soon sheâ€™s not sure who she wants more: the dependable boyfriend who already goes so nicely with her beige palate, or the spicy new intern who threatens to turn her taste buds upside down. One thingâ€™s for sureâ€”if this Stella doesnâ€™t get her groove back fast, someoneâ€™s going to get hurt. And it just might be her. This fast, flirty romance is full of fun facts about food and restaurant culture for all you Top Chef and Next Food Network Star fans (of which I am one!) while also honestly depicting the difficulty of making the right choices when it comes to relationships. I downed the whole thing in one delicious read, and you will too. For more romantic foodie fun, try Flavor Of The Week

Vera Dietz would just like everyone to leave her alone. Sheâ€™s spent most of her life keeping to herself so that no one will ever find out her most terrible secret, the one only her best friend Charlie knows: that her mom left when she was twelve and never came backâ€”and that she supported herself as a stripper when Vera was a baby. Sheâ€™s learned that playing it safe and turning off your feelings like her formerly alcoholic dad means you never get hurt. But now that Charlie has died, Vera discovers that she canâ€™t hide anymore. Where ever she goes, Charlieâ€™s there. He keeps showing upâ€”at her pizza delivery job, in her carâ€™s glove box, in the woods behind her house. Charlie has secrets too. Charlie needs to tell Vera something important about the night he died, and apologize for how he left things. But Vera doesnâ€™t want to hear. So she stays out all night drinking vodka coolers. She begins making out with a cute college drop-out whoâ€™s way too old for her. But nothing drives Charlieâ€™s ghost away. Soon she has no choice but to hear Charlieâ€™s story and finally acknowledge his part in her life–and her part in his death. Author A.S. King uses dark humor to explore themes of alienation, intervention and socio-economic class in a whip-smart story that doesn’t tread over the same old “problem novel” ground. Although the ending wrapped up a bit too neatly for me and I wasn’t a huge fan of the talking pagoda (hard to explain, you’ll just have to read it) Vera (who I picture looking like April from Parks and Recreation) and Charlie’s characters were perfectly executed, and I thoroughly enjoyed getting to know them. And if that’s not enough for you, I think this book trailer gets the mocking, deadpan tone of the book just right. (John Green fans, this is a good in-betweener while you wait for next Alaska.) 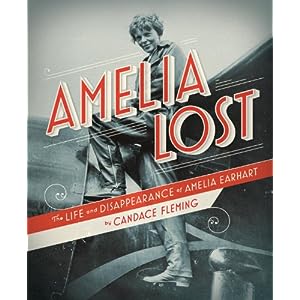 Yes, we think we know everything there is to know about Amelia Earhart, especially if you saw that movie with Hilary Swank. But since I skipped that film, I was actually surprised by how much I didnâ€™t know about this first lady of flight. For example, did you know that:

She looked uncannily like this man, another early pioneer of flight?

Her father was an alcoholic? This caused Amelia to become a caretaker of her family at a young age.

She wasnâ€™t a big fan of marriage? She was engaged in her youth for about four years and then broke it off. Then she fell for a married man. After he was divorced she finally married him, after making him beg her for two years. But only after he agreed to one-year probationary period.

She worked for a while at a settlement house for new immigrants? She taught English and coached a basketball team.

She was a fashion designer? The Amelia Earhart Clothing Company: â€œGood lines and good materials for women who lead active lives.â€

She was the Lady GaGa of her time in terms of self-promotion? There wasnâ€™t a speaking engagement or a parade she wouldnâ€™t attend in order to make more money for flying.

She was best buds with Eleanor Roosevelt?

She wasnâ€™t solo on her final flight? Her co-pilot was Fred Noonan, a former navigation teacher for Pan Am who suffered from alcoholism, but was also considered â€œa navigational genius.â€

Her husband didnâ€™t declare her dead until two years after she disappeared?

I was flabbergasted! (Especially by the hair thing:) Author Candace Fleming also intersperses each chapter with accounts of regular people who claimed to have heard Amelia radioing for help on their home radios, which adds another level of intrigue to this history mystery. Full of great archival pictures, interesting anecdotes, and plenty of speculation about what really happened on that fateful flight, this fascinating biography will be flying into a library, bookstore, or e-reader near you March 2011.