In a violent, post-Civil War Old West, natty but naughty gunslinger Drake Sinclair is on the hunt for a mythical weapon that shows the future to itâ€™s owner. Itâ€™s part of a scary set of six revolvers that some say were forged by the Devil himself, and belonged to a bloodthirsty Confederate general named Hume, now long in his grave. Each gun never has to be reloaded and each one has a sinister power: to strike with the force of a cannon, throw flames, spread disease, raise the dead and provide eternal youth. Sinclair knows that in order to stop Humeâ€™s still living cronies, he will need to overpower them with Humeâ€™s personal weapon, the sixth gun. But when he finally discovers the whereabouts of the prophecy gun, complications arise in the form of a beautiful young farm girl and the frightening fact that Hume is not exactly dead (not quite alive, either) and he will recover his property even if it means releasing hell on Earth to do it. Hume also knows a nasty little secret about Sinclair that could be the gunslingerâ€™s undoing if it comes to light, so itâ€™s even more important that Sinclair gets to the gun before Hume does. Itâ€™s a race to the bloody finish, and I was absolutely riveted to each and every full color page of this inventive GN. Iâ€™m particularly fond of westerns, and Iâ€™m really liking this trend of tucking a little fantasy and horror in between the saloons and gunfights (see also: Cowboys and Aliens and American Vampire). The Sixth Gun has all that and more, including a masterful sequence of panels that pits a zombie army against an army of golems. Brilliant! Brian Hurttâ€™s full color art is ripe and rich, with blood, bile and steel bursting off every page. A little gory and a lot exciting, The Sixth Gun serves up some hardcore graphic novel gun play. 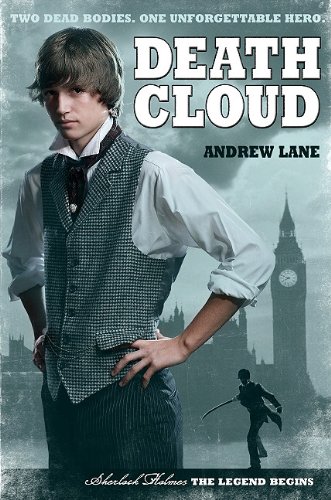 There have been so many adaptations of Sherlock Holmes lately, you knew it was just a matter of time before we met up with Sherlock Holmes, age fourteen. The year is 1868, and Young Master Holmes has just been informed that due to his army officer fatherâ€™s deployment to India, his motherâ€™s illness and his big brother Mylockâ€™s busy lawyer schedule, he wonâ€™t be going home for the summer holidays from school. Instead, heâ€™ll be staying with a little known aunt and uncle in the English countryside, far from civilization and anything remotely interesting. Fortunately, his boredom is quickly eased by his new acquaintances: brash and brilliant American Amyus Crowe, who will be his summer tutor, Amyusâ€™s beautiful red-headed daughter Virginia, and scrappy river rat Matty Arnett, an orphan boy the same age as Sherlock who lives off his wits and what he can steal. The four of them form an unlikely detective team when a body is discovered on Sherlockâ€™s unclesâ€™s property. The corpse is lumpy and swollen, and rumors of plague soon blanket the countryside, throwing everyone into a state of panic. But by using the powers of deduction that Amyus Crowe is teaching him, Sherlock soon realizes that while the strangerâ€™s death was caused by something carried on the air, it wasnâ€™t germs or disease. Another body was discovered in the nearby village in the same condition, and Matty claimed to have seen a mysterious black cloud hovering over the house where it was found. Could the two deaths be linked? If so, what was the black cloud and how did it cause two different people to drop dead miles from each other? As he digs deeper into the mystery, Sherlock discovers from a series of mostly innocuous clues a diabolical plan created by an evil genius mastermind to strike at the very foundations of the British Empire. Sherlockâ€™s first foray into investigation becomes a terrifying adventure that threatens to end his life on more than one occasion. But he must prevail, or his entire country could be lost. Great period detail, loads of interesting scientific facts from the time, and the methodical, logical plotting that we expect from a traditional Sherlock Holmes novel are all here, plus some pretty heart-pounding fight scenes. My only issue is the odd cover–since when does Sherlock Holmes have Justin Bieber hair? A fun read nevertheless, and who knows? Maybe they’ll tap the Biebs to play Sherlock in the teen movie version. Stay tuned for the sequel, Rebel Fire, coming out November 2011.

Itâ€™s been three years since the car accident that changed Mia and Adamâ€™s lives forever. Mia lost her entire family and nearly died herself. Adam stayed devotedly by her side during her recovery. As soon as she was well enough, Mia went to Julliard in New York while Adam stayed in Oregon to finish school and play with his band, Shooting Star. They were committed to making their long distance relationship work. Then, without warning, Mia cut off all communication with Adam. Stunned, Adam sank into a deep depression that resulted in the creation of his bandâ€™s breakout record. Now Adam is a reluctant rock star and Mia is an accomplished professional cellist. But Adam still thinks about Mia everyday, and by chance, attends one of her concerts in New York on his way to a tour in London. What happens next brings to mind one of my favorite movies, Before Sunrise, as Adam and Mia finally meet again and spend a memorable night walking around New York, catching up and reminiscing. But does Adam have the courage to confront Mia about why she left him? And is he strong enough to handle her answer? “I’ve blamed her for all of this, for leaving, for ruining me. And maybe that was the seed of it, but from that one little seed grew this tumor of a flowering plant. And I’m the one who nurtures it. I water it. I care for it. I nibble from its poison berries. I let it wrap around my neck, choking the air right out of me. I’ve done that. All by myself. All to myself.” This incredibly satisfying sequel to If I Stay is written from Adam’s POV, and is just as full of longing, heartbreak and gorgeous writing as its predecessor. I flew through it in a single day, dying to see what Mia’s mysterious reasons were and hoping against hope that the two star crossed lovers would get back together. Do they? Well, you better race to your nearest library or bookstore, or grab your Kindle, iPad, or Nook to find out! (And dudes, please don’t mind the gorgeous girl on the cover, this book IS written from a guy’s POV, even if it doesn’t look like it.)