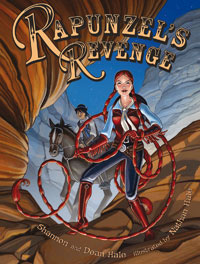 Yee haw! Shannon Hale and her hubby Dean have taken the tired old princess-in-a-tower-tale and re-imagined Rapunzel as a rootinâ€™ tootinâ€™ cowgirl, complete with scarlet lassoinâ€™ braids, and a sassy sidekick named Jack (yeah, he of the magic bean fame). As in the original, Rapunzel is taken as an infant from her mother by a wicked witch in payment for some stolenâ€¦lettuce (for those of you not in the know, â€œrapunzelâ€ is actually a salad green) and raised in isolation. But instead of sitting helplessly in a tower, she uses her mile-long braids to escape the tall tree-prison fashioned by said wicked witch Mother Gothel, and goes in search of her real mom, who has been forced to slave away in Gothelâ€™s brutal mining camp. On the way she befriends huckster Jack, rescues a ransomed youngster, drives a pack of wild coyotes across the border, and wrestles a giant rattlesnake to death. This fearless â€˜Punzie is more Sally Ann Thunder Ann Whirlwind Crockett than lovelorn Lady of Shallot, and ten times as fun! Hale & Haleâ€™s brilliant cowgirl creation is brought to vivid, full-color life by Nathan Haleâ€™s (no relation) rich illustrations, which resemble a grittier William Joyce. I havenâ€™t had so much fun since Bloody Jack

came to town! A must-read graphic novel for all ages.