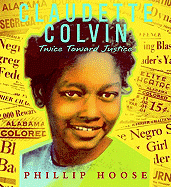 On a spring day in 1955, fifteen-year-old Claudette Colvin refused to give up her seat on a public bus in Montgomery, Alabama. She was dragged from the bus by two adult police officers, called â€œThingâ€ and â€œWhore,â€ and put in a jail cell. She was scared out of her mind, but she was tired of being told she was less than just because of the color of her skin and the texture of her hair. From her activist-minded teachers, she knew it was her constitutional right to sit where she wanted on the bus, and the entire Montgomery police force couldnâ€™t change that. So she dared to challenge the cityâ€™s segregated bus laws that demanded an entire row of African Americans must get up if even just one White person wanted to sit down. This happened nine months before Rosa Parks made her famous protest, and I KNOW youâ€™ve heard of her. So why hasnâ€™t history also made much of Claudette? The answer may surprise youâ€¦Author Philip Hoose takes you right to the tumultuous center of the Civil Rights Movement with this true story of a girl who fought back even when no one would fight for her. The most powerful words in the book come from Colvin herself, who shares the pain and fear of her frightening experience and its aftermath firsthand. â€œThe lock fell into place with a heavy sound. It was the worst sound I ever heard. It sounded final. It said I was trappedâ€¦I didnâ€™t know if anyone knew where I was or what had happened to me. I had no idea how long I would be thereâ€¦â€ This is one of the best bios for YAâ€™s around, and donâ€™t just take my word for itâ€”the National Book Award Foundation just named it the 2009 winner in the Young Peopleâ€™s Literature category.

2 thoughts on “Claudette Colvin: Twice Toward Justice by Philip Hoose”