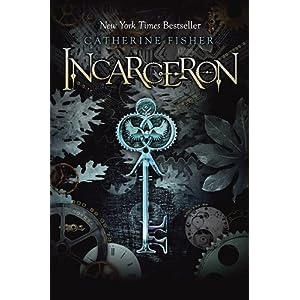 Incarceron is every criminalâ€™s worst nightmare: a sentient, ever evolving prison that morphs and grows according to its dark needs. Prisoners are born, live, love, fight and die in its depths like fleas on an infinite dog. Like the Christian hell, it is endless and full of nothing but sadness and pain. Originally intended to be a utopian miracle of technological reform where criminals would be reborn and remade, the prison instead grew a cold intelligence and turned on itâ€™s makers and the poor creatures trapped within it. Those on the Outside, in a parallel universe where humans have chosen to live like medieval villagers in an attempt to escape the anxiety of change and technology, still believe it is a paradise, while those who languish within do nothing but dream of escape. Only one man knows the truth about Incarceronâ€”itâ€™s warden John Arlex. He possesses one of two crystal keys that allows communication between his world and the galaxy of the prison. Despite his best efforts to keep it hidden, it falls into the hands of his clever daughter, Claudia, who quickly uncovers its powers. She discovers she can use it to speak to a scrappy, desperate inmate named Finn, who has found the other key and claims to have been born Outside. They soon find out that they share a secret that could undo the crushing bonds of both their worlds, but first they must engineer Finnâ€™s impossible escape. But Incarceron loves its son Finn. It doesnâ€™t want him to go. And did I mention that no one has ever escaped? Like, EVER? This astonishingly original sci-fi thriller is like a grimmer, grown-up version of The Giverâ€”only with lots more blood, guts, and breathless escapes. Seamlessly meldingÂ  philosophy, politics, culture and mythology, this super smart fantasy is like nothing I’ve ever read before, and it will have you in it’s iron grip from page 1. There’s tons of cool twists–just when you think you’ve got it figured out, the plot takes a 180–and I just WISH I could see your face when you find out just where Incarceron is, and how it was created. SO COOL! Count this fab fantasy one of my first major favs of 2010.

20 thoughts on “Incarceron by Catherine Fisher”